I drove out to the address they'd given me to get within sight of the train. It was huge and silver and said "Ringling Bros." in red on the sides. I stared at it and told myself "this is REALLY HAPPENING."

Brett, the bandleader, was waiting for me with the keys to my compartment on the train (car 39 room 7 if anyone's wondering). It's like a really small apartment. There's TONS of storage. The fridge is great, a perfect size for me! I can get all the things I'd normally buy. The shower is also very good, although I'm warned that the water pressure is somewhat lacking if you take one while the train is in motion.

Here's how my room looks from the doorway. The bunked bed is on the top left, with an option to turn the chair and table there on the left into a bed if I like. There are storage areas under the seats, sink, and in those drawers of course. 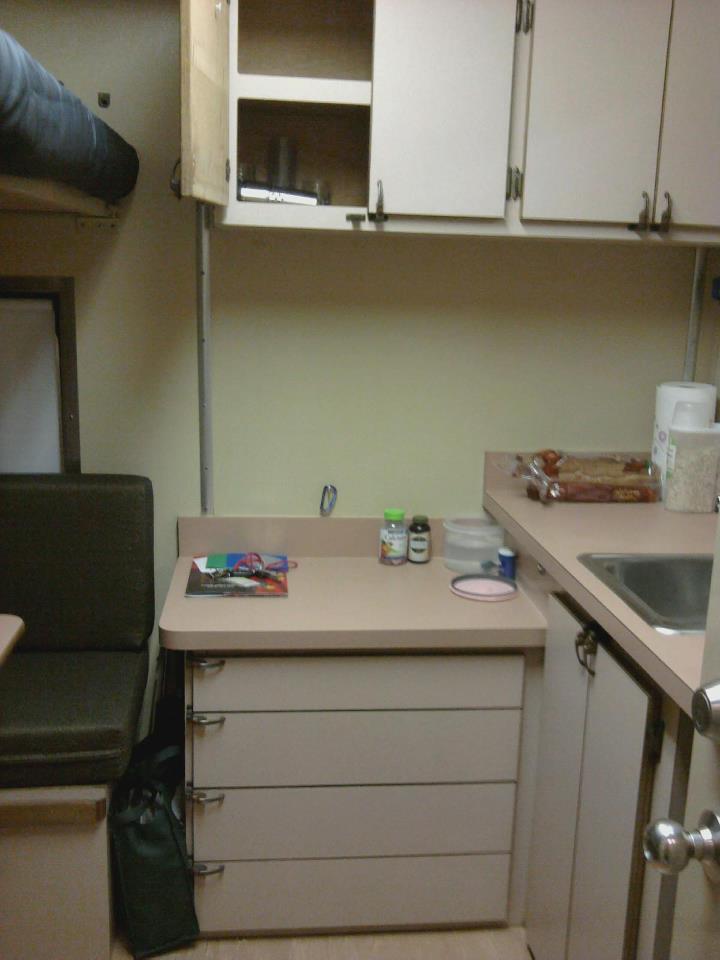 I get a microwave, fridge, and medicine cabinet. Brought the Keurig ;) 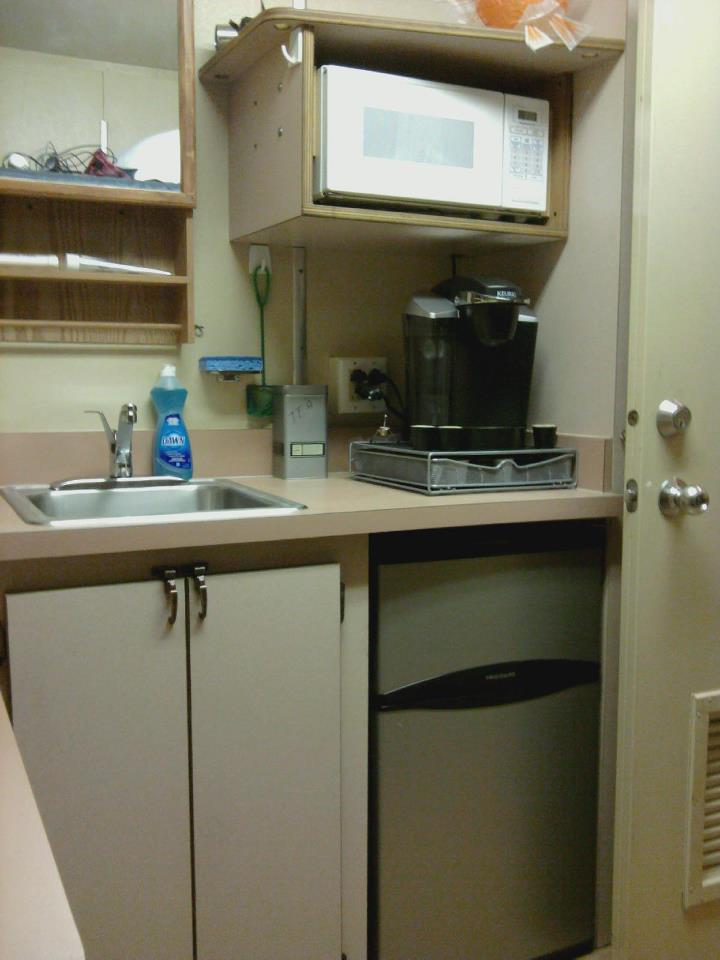 I unpacked most of my junk, then got on the bus to the venue.

I went to "16 Wagon" to fill out employment paperwork. The process easy and awesome compared to every other time I've had to do this. Made me feel uber lucky.

The bandleader showed me around and answered lots of questions for me. He let me look over the trombone book and listen to a recording. I got measured for a dorky vest (my new costume), and met lots of nice people.

I also met Asia the elephant. The bandleader told me to "wait here" and I stood where he indicated backstage. Then this elephant comes RUNNING around the corner!! She came right up to me and snuffled me for quite a while. Elephants are STINKY, like wet dog but 100x worse. Still wicked cool though!! I was awestruck!

Once the show started, the sound techs gave me an in-ear and let me sit in the bandstand near the sub trombone. I have to admit, with all the pyrotechnics, herds of animals, acrobatics and lights, it was very hard to concentrate! I tried to catch all of the bandleader's cues, but it was tough to watch the music and him at the same time.

When the tigers came out....omg. They set up the cages a few inches from the bandstand. They were pacing around and ROARING...it was AWESOME!!!! I couldn't get close enough for a good pic...maybe next time.

After the show, I felt even more nervous about playing the book next week. The music itself is not hard, but it goes by fast and there are lots of cuts for when things go wrong/right/differently. I was worried, but the bandmaster said everyone makes mistakes and steps into holes the first few shows until they get used to the gig. He said he'd put up with me through the end of this year, anyway ;D

After that, we piled back on the bus, and here I am on the train typing this at 3am because I am WAY too excited to sleep.

This gig is FANTASTIC.

Everyone is so laid back and chill.

Most days have only one or two shows, and the show is about two hours with a 15-20 minute intermission.

There is no call time, everyone is just expected to be professional and show up at the correct time/place.

Everyone is SUPER nice to the point that it almost scares me :P

Several times the sound techs asked me if my in-ear was working properly, balanced ok, etc., even though I wasn't even playing! Gosh, sound guys who actually care!!!!

Speaking of in-ears, if I go get custom molded ones, Feld will reimburse me. WOOOO!!

I'm VERY excited and can't wait to learn the music so I can stop being nervous and enjoy working for the circus!!!