Without getting into too much detail, I done f***ed up.

As mentioned in the previous post, Jameson and his realtor have been having a crazy amount of trouble selling Jameson's condo.
Well, one morning we got the news that our HOA was dicking the deal even further in a variety of ways. Mostly by being corrupt and unorganized.

This information seemed to have a serious impact on the ability to sell the condo.
Feeling helpless and frustrated, I made a very poor choice. Even though I am in no way involved in any part of this process, I was so angry and upset that I got on facebook and sent a very nasty message to Jameson's realtor. The worst part is, I didn't even tell Jameson I was doing that.

So Jameson had to hear about it when his realtor called to warn him that if I continued to behave inappropriately toward him, they would not be able to move forward.

Anyway, I had already done it and could not take it back. It seemed like things were moving forward anyway, although at great cost to Jameson financially and emotionally. I didn't know if I could be forgiven, that was some pretty serious damage I've dealt to our relationship, and this isn't the first time it's been me who's been the weak link. But all I could do is keep trying. All I could do is try to be a better person. I wished so badly that I could undo the damage I caused. I want so badly to be the type of person that others can rely on. But clearly, I'm not there yet. And I don't know how much patience there will be in the world for me to become that person. I can't expect others to tolerate my failings or wait for me to be a better human. But at the same time, genuine change often doesn't come as fast as we'd like. So I don't know where that leaves me, us.

I made a mistake. Moving on.

We moved back into the condo on Tuesday. On Tuesday night I got to attend the wedding of two awesome circus clowns, Dean and Taylor. Jameson couldn't come because he had to work, but I made sure to give his regards to all of our friends :) It was great to see so many circus people again and see how everyone is doing! 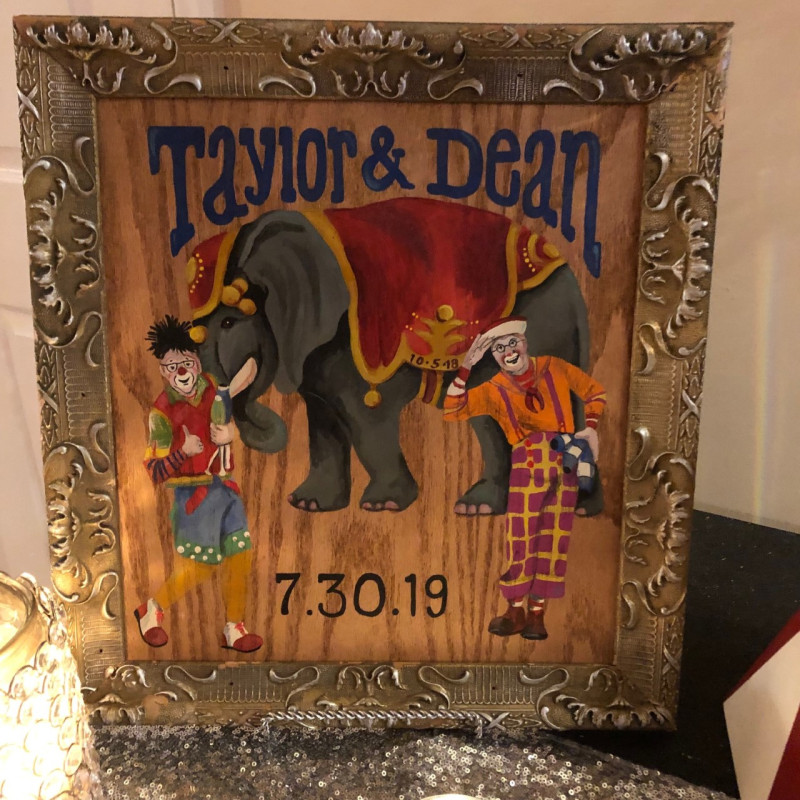 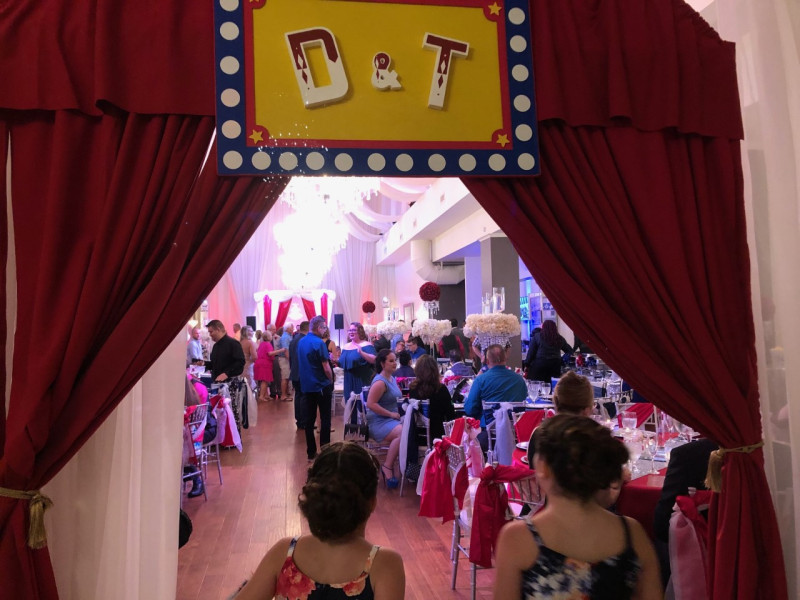 They set up a little "SugarFest" station where you could load up on junk foods! 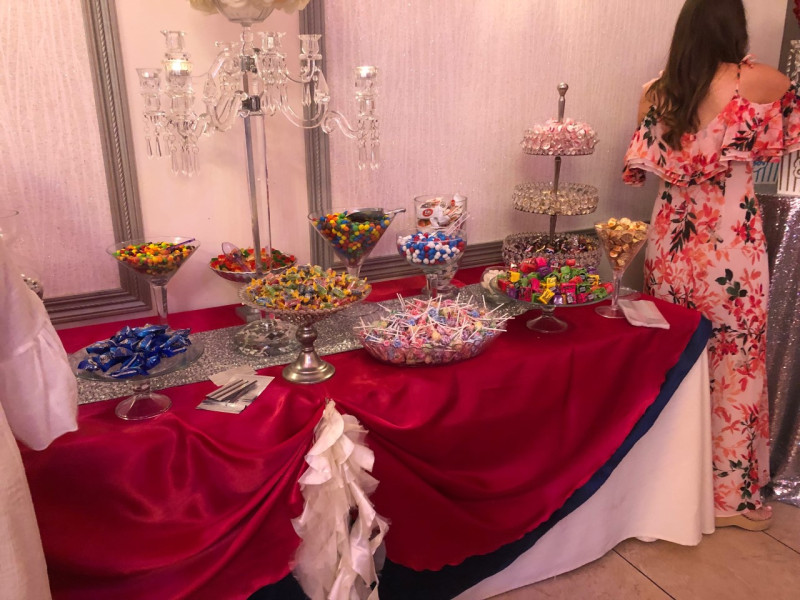 Of course it's not a circus wedding without circus acts! There was a hoop performance that was really spectacular, followed by an acrobat who balanced on stacked chairs and then made a touching wedding speech from his perch. 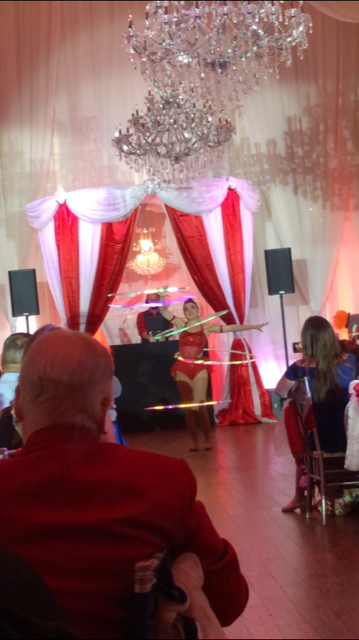 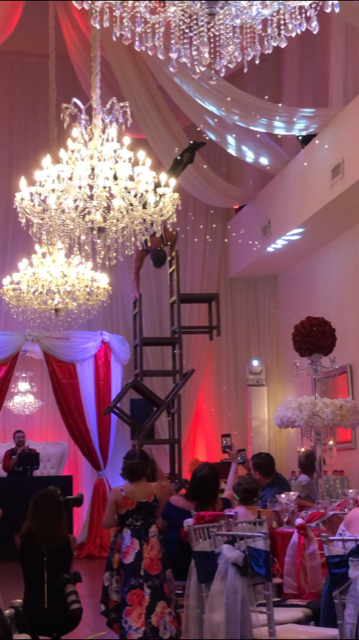 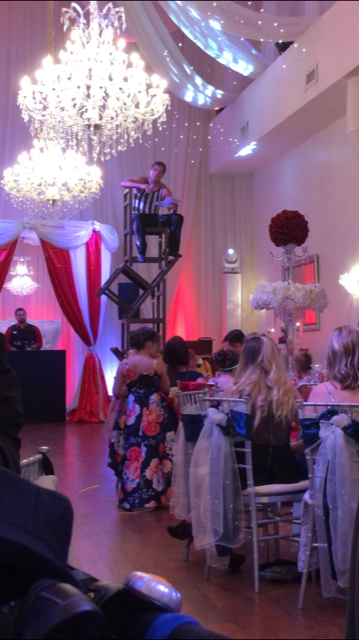 A few close circus friends asked about Jameson's house situation. I answered as best I could without going into too much detail, although I did spill the whole story for Dustin and Brandon, two clowns who seemed sincerely concerned. I am extremely grateful that they took the time to talk with me, actually, because they've had a lot of the same hurdles as our relationship is facing (having to do with one partner not being as strong as the other in a variety of ways/situations). They listened and offered advice and encouragement, then suggested a few books that I might like to read to help address some of my personal shortcomings. I am so, so grateful for circus family. For people who can see all of the horrible things about me, and still hug me, encourage me, and give me a chance to change. I dont' deserve it, I never have, and I am so grateful for the grace and patience of others.

Back to the wedding, the whole thing was just really wonderful. For the cake cutting, Dean and Taylor pied each other, hilarious! 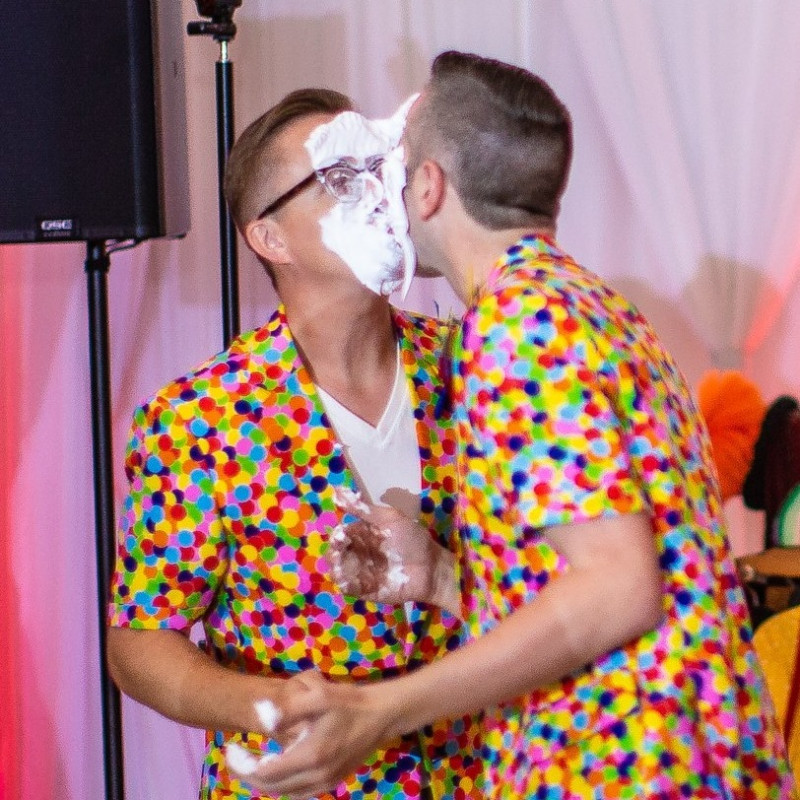 Then for their first dance, they did a juggling act! It was so cool and so "them" :) 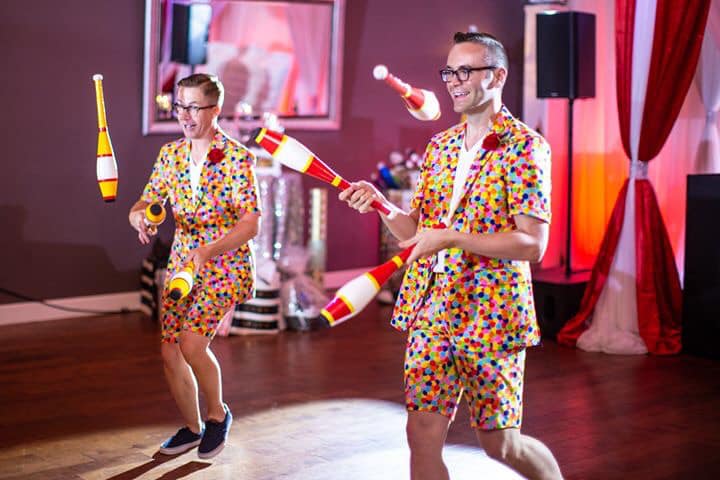 Everything was perfect. Many circus attendees commented that it felt like a "real circus party", and questioned whether a venue had even been necessary, because even on the street or in a barn we would have had just as much of a great time. Because all we needed for that, was each other.

I really wished that Jameson could have been there, but he did get to go out with the Disney crowd the very next night and blow off some steam. I think both of us needed that a lot, just a chance to loosen up with friends and not think about things for a while. Thank god for entertainment, yo.

On Thursday Jameson had to go to the office, and as of this writing we are supposed to move into the house on Friday. Don't ask me how, I'm not asking and have pretty much forfeited any right to the details at this point. But yes, supposedly this is still actually happening. So I stayed home and re-packed, gave everything a quick wipe-down, and generally made sure we'd be prepared for movers to come in the very next day.

You guys. It happened!

Last Friday, the movers came. We STILL did not know if we'd actually be moving into the house! The person buying Jameson's condo came for one last walk-through while the movers loaded up the truck, then she went to go sign papers. It was weird to see the apartment get more and more empty. 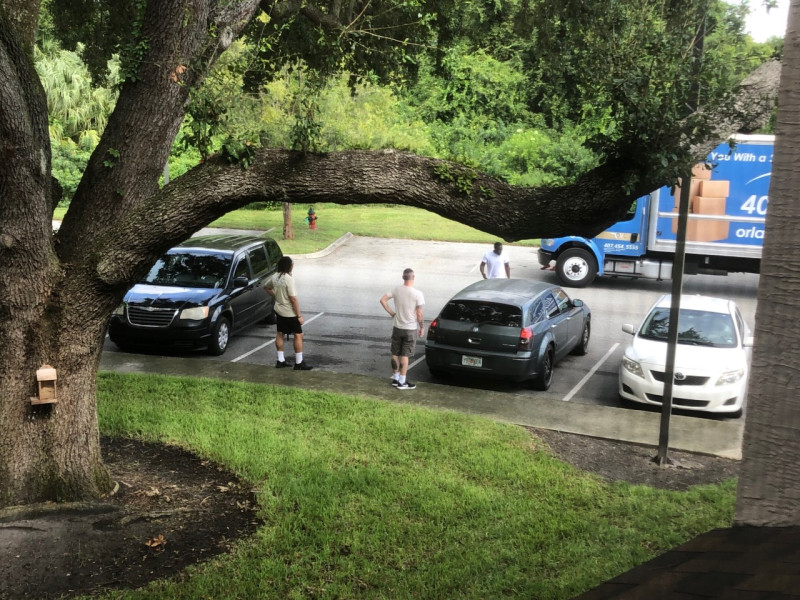 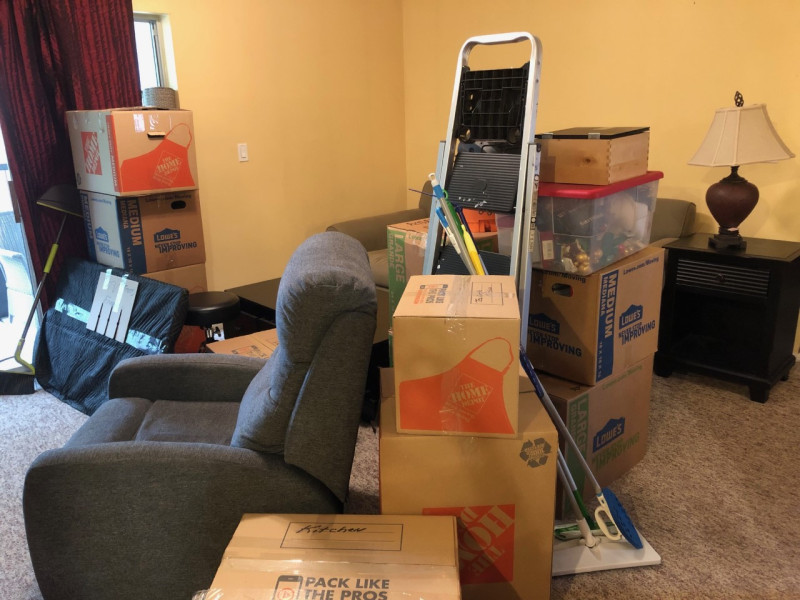 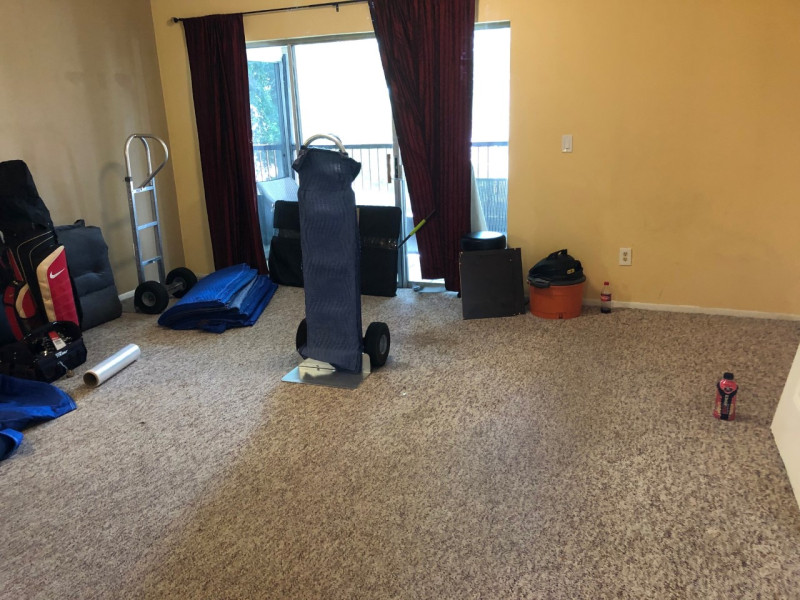 Finally, everything was packed up. Jameson signed his papers, and then he and the movers had to wait until we'd be allowed in the new house, hopefully around 3pm. Meanwhile I got to work dusting and vacuuming and cleaning the condo as best I could for the new owners. It was strange to be the only one there. I did the best that I could, and locked the door behind me for the last time. Goodbye Holden Heights.

Then I drove over to the new house. Jameson and the movers were there already, moving everything to the garage.

Soon the movers were finished, and Jameson and I were left standing around. We waited and waited. There was still a possibility that we'd be getting a hotel for the night if the money didn't go through. It started to rain.

Then...a knock on the door!
It was the realtor!
The house belonged to Jameson! It was all over!
YAAAAAAAY!!!

In the midst of our excitement, I got the opportunity to apologize to the realtor for my behavior. He was very gracious and forgiving, and I was extremely grateful. While I was delivering my apology, I felt Jameson come up behind me and gently rub my back. I can't tell you how this made me feel, after spending the past week terrified that I'd ruined everything.

I'm still going to be staying off social media for the most part, because that should never have happened. But I think now that it's all over and we have moved together, we can start fresh.

And then...what a beautiful house!!! 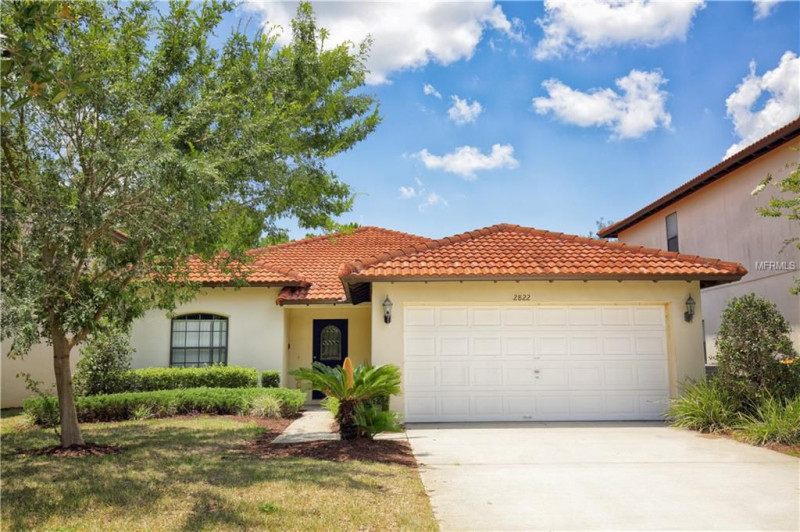 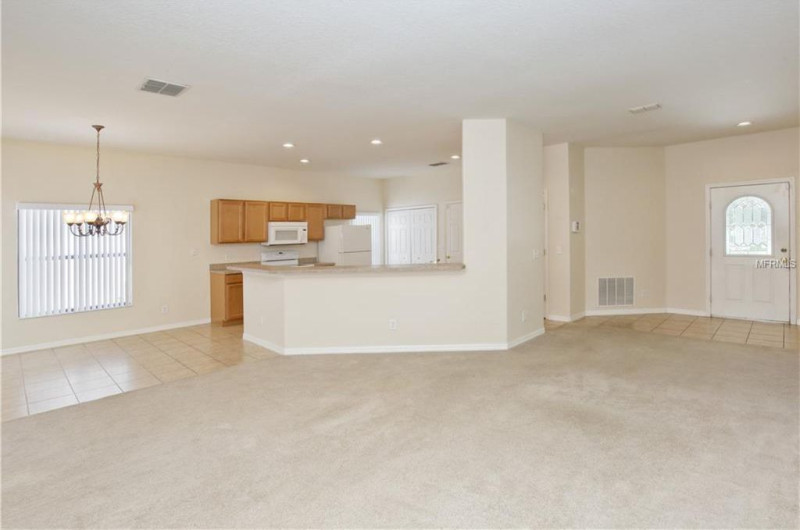 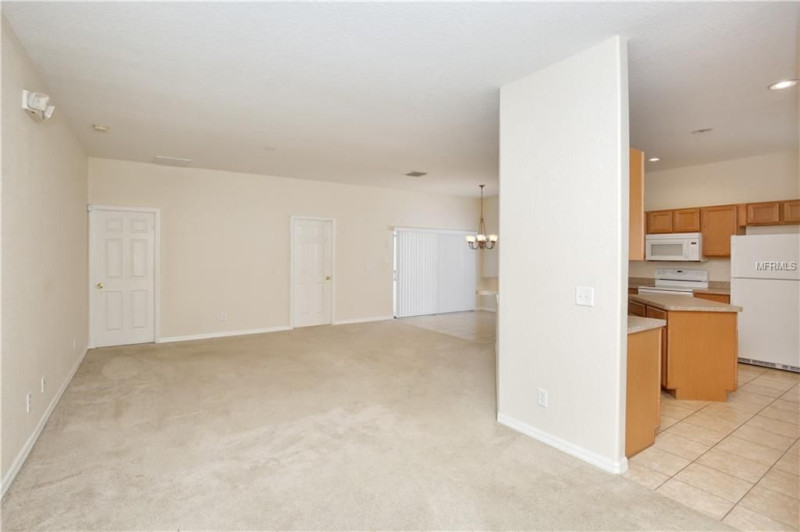 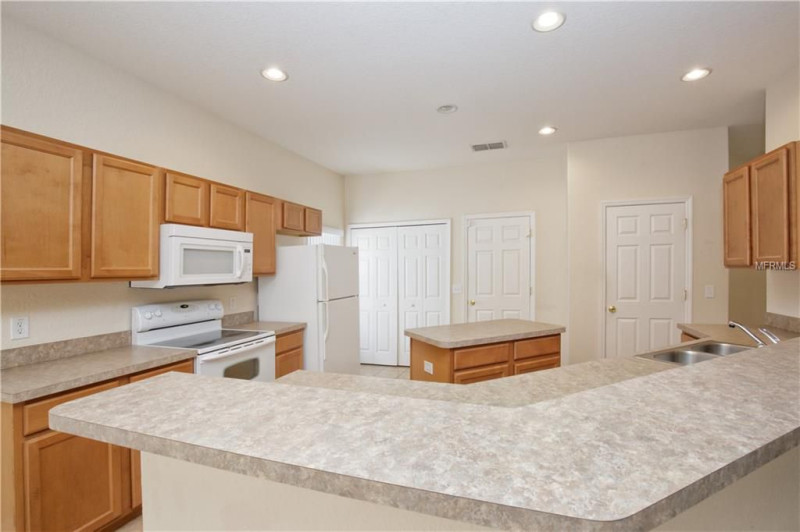 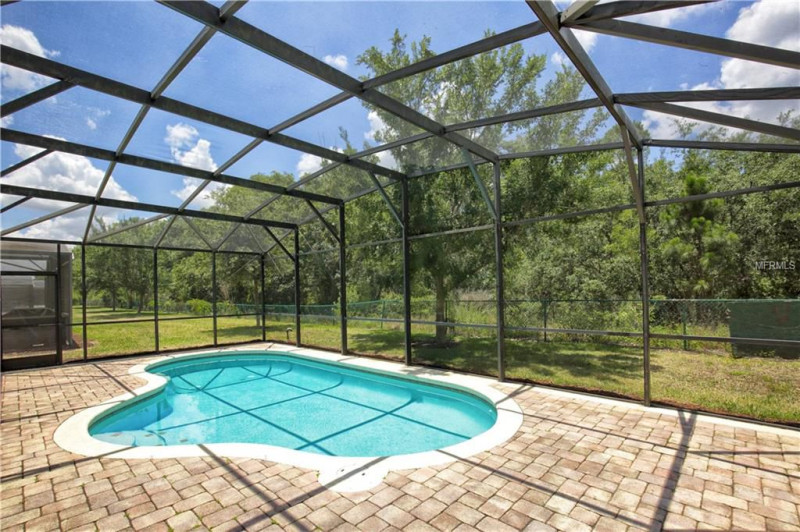 We spent the whole week unpacking, setting up utilities, and making plans for making a home.
Every day I've been going to work, running to Home Depot or Target or Lowes, and running home to work on the house.
It's actually kind of fun, something to look forward to every day!

On Wednesday Jameson's dad came to visit, watching Jameson's show at Epcot and then having pizza with me in the evening.
We found a great brick oven pizza place very close to the house! It's been really hard to find good pizza in Orlando. Yay! 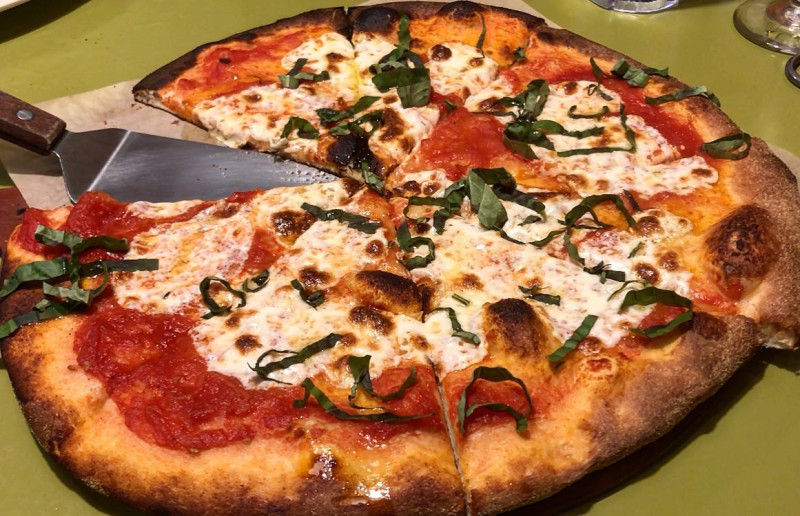 We gave him a house tour of course, and he loved it! He also gave us some awesome artwork for the new home. We can't wait to start decorating! Thanks Mr. Boyce!

On Thursday we got a Nest thermostat and Ring doorbell, and someone came to hook up our cable and internet services. It was nice to finally have internet in the house!

In the evening we headed over to Hollywood Studios for a very special cast-exclusive event: a preview of Star Wars: Galaxy's Edge!!!
Jameson was allowed to bring one guest, and he brought me!!!
You guys...it was incredible. Like, I didn't even feel like we were at Disney at all. It was completely immersive, from the castmember costumes to the food to the landscaping and rides. Even the bathrooms were themed! When we saw employees moving dumpsters, chairs, or other equipment, it was all made to look like Star Wars cargo materials!! Insane!

We didn't get into the Cantina because there was a huge line (and we could only sign up for certain events), but we did get to pilot the Millennium Falcon Smuggler's Run ride! I get motion sickness and have particular trouble with simulators, but I was OK as long as I focused on my task in the ride. There are two pilots, two gunners, and two engineers for each compartment. I was a gunner, so I did a buttload of shooting haha. I did my best to watch the main screens where the action was taking place, but could not look at it for more than a few seconds. I would say if you are sickness-prone, just be prepared to miss a lot of the immersive element. But you can still participate! Which I really appreciated :)

It was just such a fun experience. Here are a few of my favorite things that I got to see! For those unfamiliar with Instagram, you can hover your mouse a little to the right over each image and an arrow should come up, click it to see more pics and video!

The green drink in that one video was supposed to be "milk" from Bubo Wumba Family Farms, haha. It's a smoothie-type drink made with coconut and rice milks. Jameson got a blue one that tasted sort of like cotton candy and was spiked with rum. Mine was green and citrus flavored, with tequila. Not everyone will like these because they are not very sweet and they're pretty thick, but I was glad to try them!

On Friday there was a lot going on. I had someone coming over to power wash the pool patio, and another gentleman to install our new washer and dryer. Unfortunately it rained partway through they day (because Florida) so the patio did not get finished, and then when the new dryer didn't work we had to hire an electrician to find the problem (a bad outlet). While I was glad to get some things done, I was a little put out by having to reschedule the deck sealing...now it will happen on a day I'm not around, and Jameson will have to handle it. It was supposed to be a present from me, so it irritated me that I couldn't get it done hassle-free for him. But as Jameson so aptly put it, "Life doesn't work that way." Ain't that the truth!!

So along with all of that craziness, we had a nice day. I tested out the new washer and dryer, they're great! Jameson played some video games for the first time in like a month, and we watched Food Network together while eating dinner. Jameson installed a Ring doorbell so now we can scream at anyone trying to break in or steal packages. And we also cleaned the bathrooms and unpacked a bit more. In the evening Jameson had a gig. All in all a good, productive day :)

Saturday it was back to work for both of us. I took some excess moving trash to the dump and picked up a few things for the house, then went to work, then came home, ate dinner, cleaned up a little, and had a little Me Time. In a few days I start my second job, and while it won't take up all of my time it will certainly take more. So I want to enjoy my free time when it rolls around!
Collapse