Thanks to a "floating holiday" that I needed to spend, I was able to enjoy a 3-day weekend! Yay!

As you saw in my last post, I spent Tuesday evening baking a loaf of wheat bread.
This recipe from Jenny Can Cook bakes up in about two hours, so it's great when you want a nice sandwich bread in half the usual time. I remembered enjoying this recipe from when I first started learning to bake bread, and wanted to give it another try now that I know what I'm doing. I also wanted to try the Tangzhong method on it!

The math involved in calculating how much flour/milk/water was needed for the Tangzhong roux was very annoying, as I'm bad at math. But honestly I think as long as I keep the ratio of flour to liquids for the roux at 1:5 and use 10% or less of the bread's ingredients, it should turn out fine.

And it DID turn out fine. Looking back on my earliest bread posts, I can definitely appreciate the progress I've made.

Anyway, once that was done it was 10pm, so I got to enjoy a whole eight hours of sleep.

Wednesday morning was nice because I didn't have to bake bread. Not that I dislike doing that, it's just nice to have nothing pending first thing in the a.m. sometimes. I enjoyed some fancy siphon coffee with breakfast, then got to work cleaning up the garage. Our garage isn't all that bad, but we've lately been just kinda throwing things against the walls to get them out of the way. I wanted to store my big planter, and needed to ensure that there'd be room for it. I moved everything away from the walls and swept dust and dead leaves out the door, then sorted things according to use and ownership, i.e. Jameson's keyboard and guitar cases and amps and other music stuff went to the corner where his storage closet is, while my gardening stuff and bike and bags of dirt and fertilizer went to the opposite wall where they'll be out of the way while I'm gone.

The planter ended up against a wall and on top of the pool cover, I took the legs off for easier storage and so that we can store stuff inside the planter too. It all looked very nice when I was done, and got the Jameson Seal of Approval. 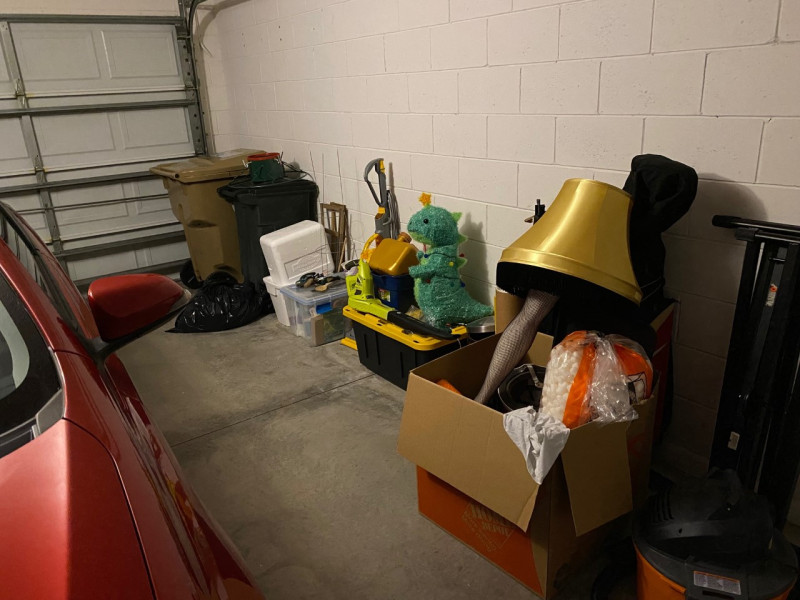 After lunch I went back out again to weed around the house, especially the front and the pool deck.
I did my best using the leaf blower to clear off the deck, but the extension cord kept dipping in the pool and it was freaking me out so I'll have to go back out again one more time with a broom. Just as well because I still need to scrub the lanai screens.

That was most of my day, it was pretty time-consuming stuff.
In the afternoon I had a snack and practiced trombone. Soon it was time for steno school.
I did end up passing the most recent test that I took (yay!) so now I just need two more to move on to the 120wpm class. It's taking all my self control not to attempt both tests right this minute, but I need to pace myself because with only a limited number of tests available any more than 1-2 failures is NOT an option.

After steno class was GLAAD training for Troika Entertainment.
I learned some things I hadn't known, and had some small realizations that will mean more independent research to ensure that I understand the many terminologies out there. The last thing I want is to offend someone, especially when we're about to do a show about a man dressing as a woman.

On Thursday after breakfast I took all the loose items out of my car to prepare it for interior detailing.
And as soon as I had gotten everything inside it began to rain.

I started driving to the detailing place, but it was raining harder and harder and by the time I arrived it was really coming down, and I could see all the detailers moving the cars into the garage or under shelter to wait out the rain.

So instead I decided to drive around and take care of some of the tiny nagging things on my to-do list.

For example, getting a roll of quarters for hotel washing machines or laundromats.
It is so hard to get a roll of coins anymore!
I asked at Walmart and at Target, neither had/were willing to sell me any. So I went to my bank and waited in line for nearly 15 minutes. They were able to give me a roll after scrounging around a bit. Hopefully a lot of laundromats on our tour will accept credit cards, is all I can say.

At Walmart I picked up some treats for Jameson and I. Neither of us like to go to Walmart unless we have to, but sometimes they have the weirdest "limited edition" junk foods that we just HAVE to try! This time it was "fruity cereal" Kit-Kats, a white chocolate Fruity Pebbles bar for Jameson, and some Dunkaroos just because I had a craving.

I also specifically wanted to go to THIS Walmart because they have an Auntie Anne's inside.
Soon I'll be making soft pretzels to give to my coworkers, and pretzel salt has been difficult to find.

Three times I had to describe to the young lady that I wanted SALT.
Her: "Salted, ok. Do you want the pretzel or pretzel bites?"
Me: "Neither. I'm asking if you would sell me some pretzel SALT."
Her: "I mean...those are the two kinds of salted pretzel that we have."
Me: *SMH*

Finally I got through with, "I'm making soft pretzels at home, and I just need a little PRETZEL SALT, just the salt. You can't buy pretzel salt in stores. Are you able to sell me some? JUST the salt, NOT any pretzels."

Realization dawned on her face. She smiled and winked and said, "I got you, fam."

And then she poured some pretzel salt into a cup and handed it to me.
Before I could thank her she turned around to help a customer, so I slipped a fiver under the corner of her register and hurried away.
Yay! Now I have salt for my pretzels! It doesn't look like much, but that's like 2" of salt, it's definitely enough. 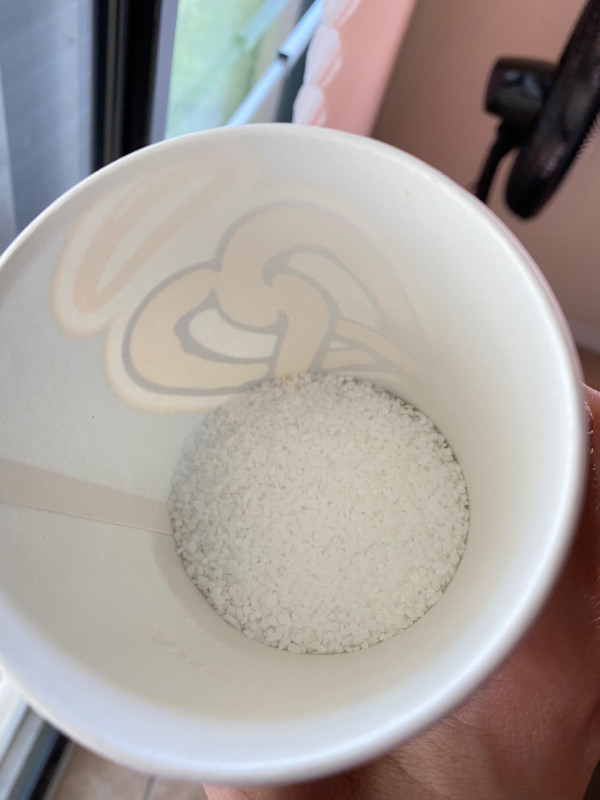 At Lowes I got a filter for our fridge and some cleaning supplies.
At Target I got sushi for dinner and some maple-flavored coffee, just because.
Back home I showed Jameson how to install the fridge filter since he may have to do it once I'm gone.
Then I sorted through my stuff from the car, putting some of it in storage and the rest back in the car.

I washed all of my work sweaters and jackets, and did some research on aeropress coffee since it's similar to a French press and supposedly more portable and easier to clean. Ever since the circus I have this rule about having "two of everything", and if I bring my French press on the road I want to have a second one at home. Or, I could bring an aeropress and leave Frenchy at home. Same difference.

About that time Amazon delivered an Ubeesize phone tripod that I had ordered, great timing because my computer's camera has completely stopped working as of last night and I had media training in less than an hour. This thing should come in handy when I want to do things hands-free, like cooking in the hotel or playing trombone. It also comes with a bluetooth remote so I can start and stop the camera hands-free, too. Tonight it held my phone for the Zoom meeting, which turned out to NOT be a media training session but something else equally useful.

Anyway, after that I was supposed to practice steno and/or trombone, but for whatever reason I was feeling extra tired.
So instead I practiced using TikTok, and goofed off online, and thoroughly enjoyed it.
As a lazy Millennial I know I shouldn't, but it's just in my nature I guess.

Friday was my extra, lovely third day off.
I woke up slightly earlier so I could sip my coffee slowly and look up recipes for tonight's dinner.
Then I drove half an hour into downtown Orlando to get a haircut. 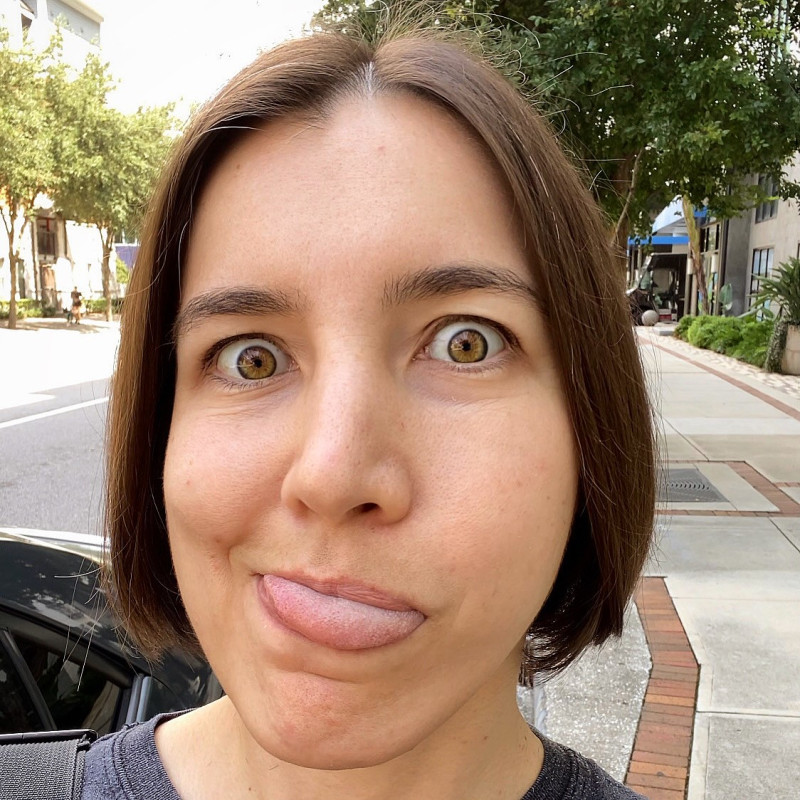 Which of course does not change the fact that I have a horseface.

Back home I put some steaks in the sous vide for Jameson and I, then proceeded to fail one of my dwindling steno tests.
Isn't that great! Go me!
Dinner was the sirloin steaks with roasted potatoes and broccoli, very nice. We also indulged in the Omaha Steaks sticky toffee cakes for dessert, good lord I could eat eight of those even if they made me sick, they're so dang good.

After dinner I did meal prep then practiced trombone while Jameson played games with a friend.

Saturday should be a regular work day.
Sunday we are going to enjoy Universal Horror Nights after I get out of work.
Monday I have steno class.
Tuesday will probably be my last day working from home.
Wednesday and Thursday I have steno class and also anti-racism training for tour.
I'll also be making caramels and pretzels for my coworkers.

And then, only two days of work left.

Some things that I still want/need to do before the tour: